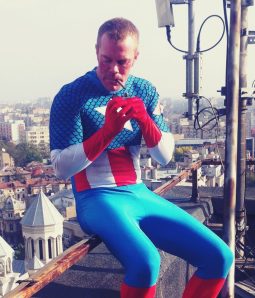 Hey America, it’s your birthday.  Congrats Old Lady.  Still experimenting with the whole ‘democracy’ thing after all these years?  How’s that workin’ out for ya? I read about you a lot.  And I must say I’m proud.

Well, most of the time.

In retrospect, we’ve had a tricky relationship huh babe?  And we’ve been apart so long. So much to catch up on.  Where to begin?

Before my folks moved us to Botswana you seemed pretty sweet and all.  There was that jungle gym in the playground at the neighborhood elementary school.  And I remember finding pennies lying around a lot.  Streets paved in copper…

When we were in Botswana you were my bestest of imaginary friends; a façade you smashed rather quickly upon return to Kansas.  Me, a short, chubby, red-head, British-accent, flute-playing pre-teen.  You, just as cruel as kids everywhere.  Thanks for that lesson, it helped lay a particular kind of foundation for the rest of my life.  Hurt a bit, took a while to figure out how to take it, not gonna lie.

And since 2006, bouncing around the former socialist/communist world… well, I have to say my dear, you are again a bit illusory.

On one hand, like many out here I lust after the ideal.  On the other, I can’t tell you how much it hurts that folks like Snowden are afraid to go home.  Not saying he was or is right, but there is nothing good about people being afraid to speak up when they think something has gotten out of hand.

I love that you produce both comedy and tragedies like Jersey Shore.

All said, I still kind of love you but I have to say, I don’t love the disappointment of post-democracy since I have always been disappointed by unrealized potential and wasted opportunity and disenfranchised citizens.

I hate the complacency of ‘we knew they were listening’ and kind of wish you would take to the streets a bit more over things like this.  Perhaps you have noticed – – street protests are vogue in this, the summer of our discontent.  Why not join them?

Speaking to a few of them from some of the hotter spots, it seems the youth of the world are dancing a little tango around you – pretending to abhor the promiscuity of your capitalist smile while begging you out of the corner of their eye to intervene. They look up to you a lot more than perhaps they should, babe, believing and hoping even though you keep finding little ways to remind us all you are still learning too.

I guess, in then end, it’s good for you to know that.  Take it for what it is.  At the very least, as you chow down on all that watermelon and the burgers roasted in your honor, think about raising a glass to those out there in the streets.

After all, your fireworks stand for a time when we were in their shoes.

And, if I may say so, you’re lookin’ finer than a new set of snow tires in that stripy birthday number. I’m a bit jealous, ya big hottie you :*