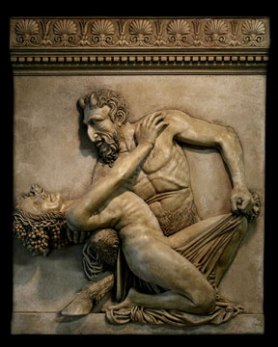 Man: Hey baby, put down 50 Shades of Grey for a second.  So… we both know our sex life has been so-so.

(pause) Now, I’m not saying it’s you. You’re busy and tired from work and taking care of the house and kids all that (great dinner by the way, your spaghetti has always been my favorite).  But I think I have a plan.

(pause, passes wife a bottle) Take this pill, and you’ll be back to normal, just like when we first hooked up… Forever…

Enter narrator Chris stage left: Now hold on a second, Chemical Casanova. I’ve been reading up a bit on Lybrido – – this ‘Viagra-for-the-Ladies’ designed to bring some zip back into the marital bed.  And I’ve gotta say, you folks do what you gotta do, but let’s think for just a sec about medicating for monogamy.

Lybrido was created by a guy who got dumped and wanted to make sure that would never happen again.  It was created to strengthen monogamous relationships in which the woman is losing interest in her man.

Now, commonly accepted evolutionary psychology/sociobiology has been saying women want to settle for a caretaking man, while men need to get around and spread their seed.  But there is a growing body of evidence to the contrary, not to mention that women folk might simply want more than one dish in life; just as much as boys might.

Agree with the research or not, feel comfortable with the idea of polyamory or not – but I hope it makes you at least a bit uncomfortable that the Patriarchy’s response is Dope the Ladies.  Just mix 2 parts male dominance, shaken and stirred with one part inferiority complex.  Add a dash of Myth-of-Monogamy.  Mmm… tastes controlling.

Sure, sexually monogamous Shangri-La exists.  And kudos to those who find it.  But with 40-76% of marriages reporting an affair (not to mention those who don’t report) I find it hard to presume classically sexual monogamy is, in fact, normal.

I’m not saying infidelity is right.  I’m saying it happens.  Perhaps better to accept that it does and decide together how to deal with it.  Or don’t talk about it at all.  Maybe in this case ignorance is bliss.  Regardless how you deal (or don’t) it’s not an easy talk.  It hurt like hell the first time a woman I loved and trusted told me she believed she was polyamorous. But faced by her rational belief in herself as such, the last thing I would have thought to do was offer her a handful of pills – any more than I would have had she said she was queer.

Thinking monogamy is some sort of naturally Right thing, and believing the alternatives are wrong enough that we need to drug people back to a ‘natural state’ is ludicrous.

This kind of dominant male thinking in the Judeo-Christian West, driven by hundreds-of-years of ‘educated,’ white, God-fearing, power-tripping politicians, backed up at the flip from BC to AD by a bunch of more-tan, social-engineering, God-propounding lobbyists, brought us all sorts of good things like slavery, eugenics and genocide.

Medicating morality is a frightful concept and I am guessing this is just the beginning in an era of exploding awesomeness in genetics.  It will be interesting.

Things to look forward to include the Conservative Right getting ahold of this and coming out in support of these pills with the argument that we need them to maintain social order.  It will at least get them into a space where they might admit sex happens.  The response from folks like the Daily Show will be priceless.

I also look forward to people realizing that just because the lady is more excited, doesn’t mean she’s necessarily more excited about her husband…

Again, you do what you gotta do.  But for my part?  I would rather deal with my insecurities, the world as it is, and love ladies just the way they are.   It won’t be easy, but God knows, it never has been.